Garment originally designed to be worn during the opening of the solo exhibition (､ﾝ､) at Dürst Britt & Mayhew, The Hague (NL), on 02.09.22.
After the opening, the garment was left in the space as it would have been in a bedroom.

Originally made of silk, gold and silver cotton, it is the shirsakari, a sumptuous fabric intended for the ceremonial clothes of princes, kings, emperors, high dignitaries of the Mughal Empire who, from the 16th to the 19th centuries, presided over the destiny of India.

In the 19th century, the fabric is transformed. After a dream life in the palaces of the Maharajas, the seersucker faces the daily reality of the working classes. Cotton becomes the one and only fiber, workers and peasants of the southern provinces of India use its formidable assets.

This construction is based on three dimensions: length, width and thickness. A combination of planes that leaves a free space between the skin and the garment, allowing air to circulate and body moisture to escape. Functional, it is washable, strong, suitable for hot and humid climate.

Also discovered in India by Her Gracious Majesty’s officers during the colonial period, the pyjama is the western adaptation of a comfortable and ample daytime garment called “pajama” by deformation of the Persian word “payjama” which means “leg garment”. Soft and loose pants, tightened by a cord at the waist, it is accompanied by a Kurta, a long and slit tunic. A particularly convenient wardrobe for equestrian activities, but also for riding elephants or for camel drivers.

These gentlemen from the colonies willingly bring it back to their mother country. The wardrobe of the gentleman being already largely codified, the pyjamas, composed of pants and a jacket which borrows as much from the shirt as from the safari jacket, finds its ease at the beach. Gabrielle “Coco” Chanel complete with a loose-fitting shirt or a sleeveless top - could combine elegance and comfort. As early as 1918, she began wearing “beach pyjamas”. With their gender-confusing suggestion of the boudoir, they were seen as shocking, but such was Chanel’s influence that they became popular. From the 1920s, the pyjamas are the outfit in sight to lounge by the sea and designers compete with boldness and creativity using cotton with large multicolored stripes or embroidered patterns on silk.

It was not until the 40’s that pyjamas became a night outfit. Considered more masculine and more modern than the shirt or the nightgown, in particular thanks to its two pieces reminding the suit, whereas the traditional sleepwear evokes the dress, the pyjamas become the asset of the modern man and woman in the bedroom.

This garment was designed by combining the codes of casual suits, work clothes, and the more classic elements of today’s pyjamas. To be wear inside or outside, for men and women.
You can order yours, made-to-measure, by contacting me. 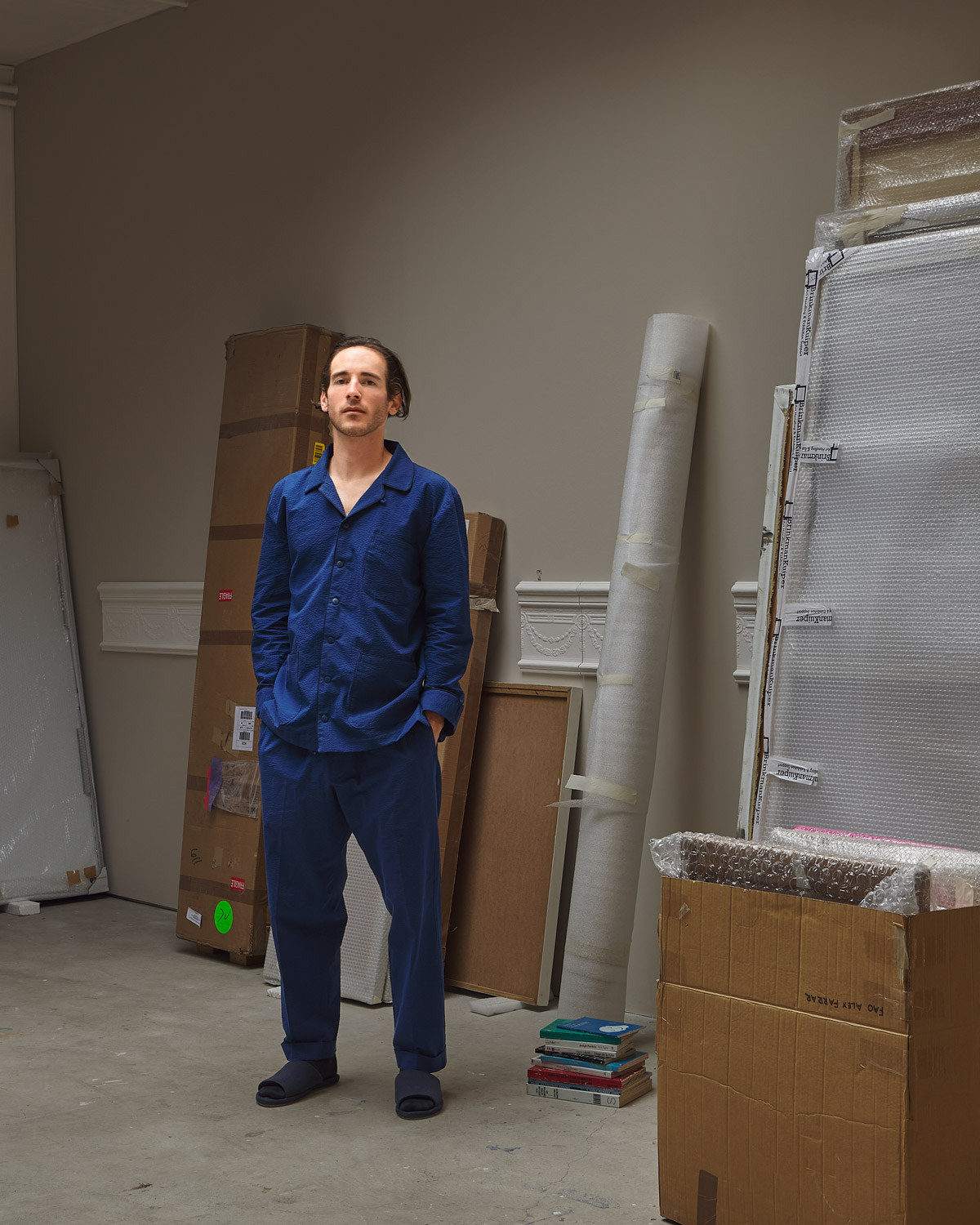 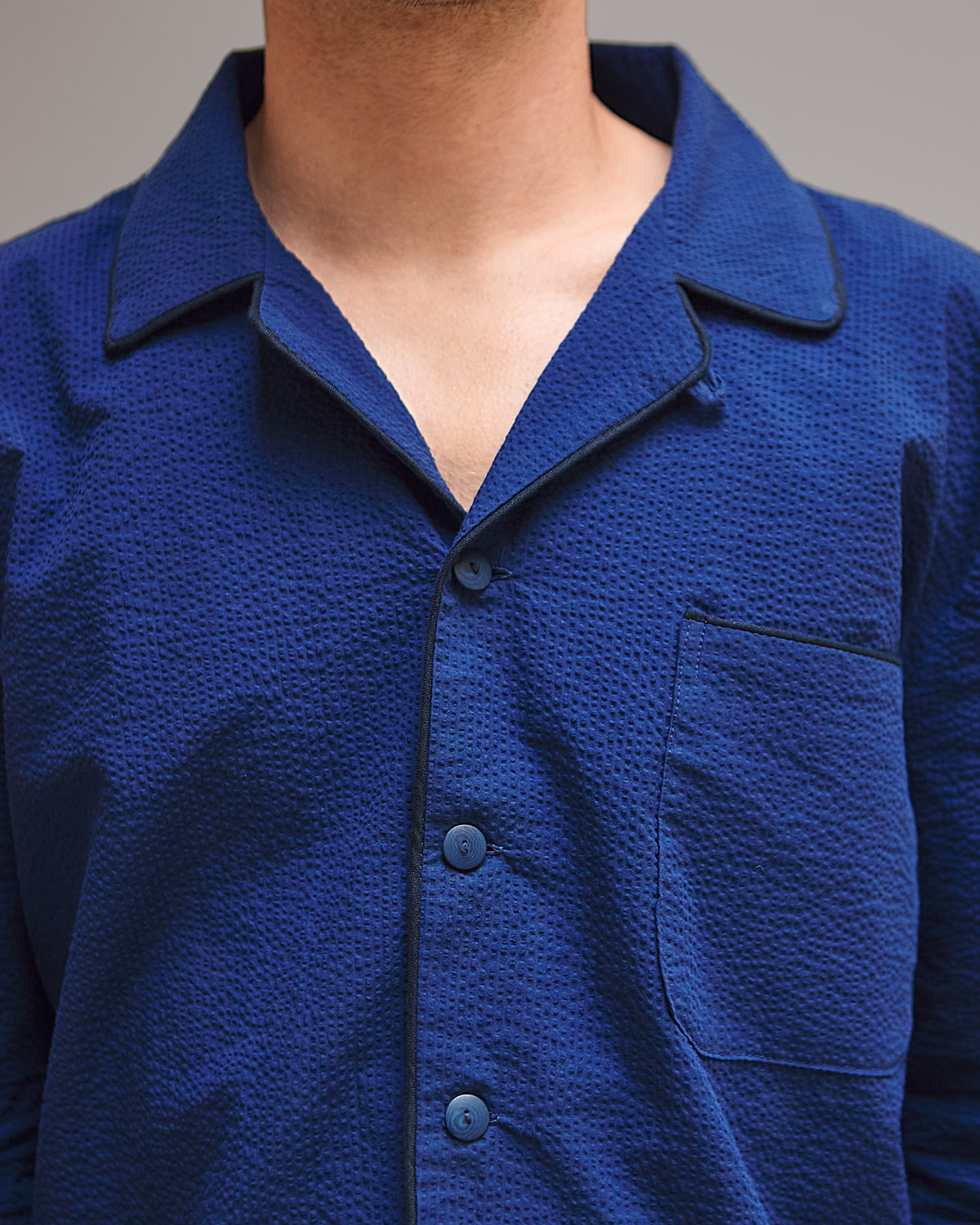 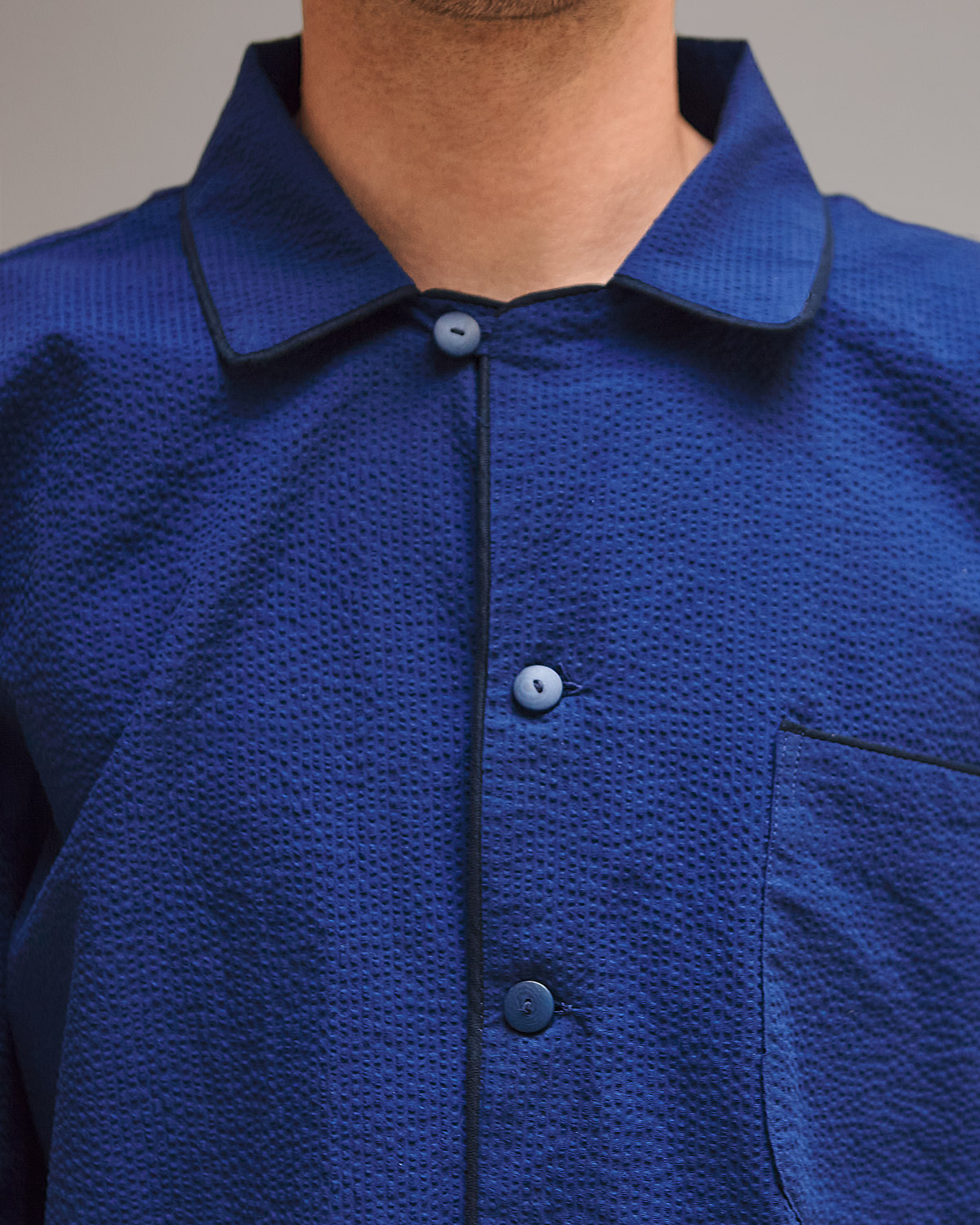 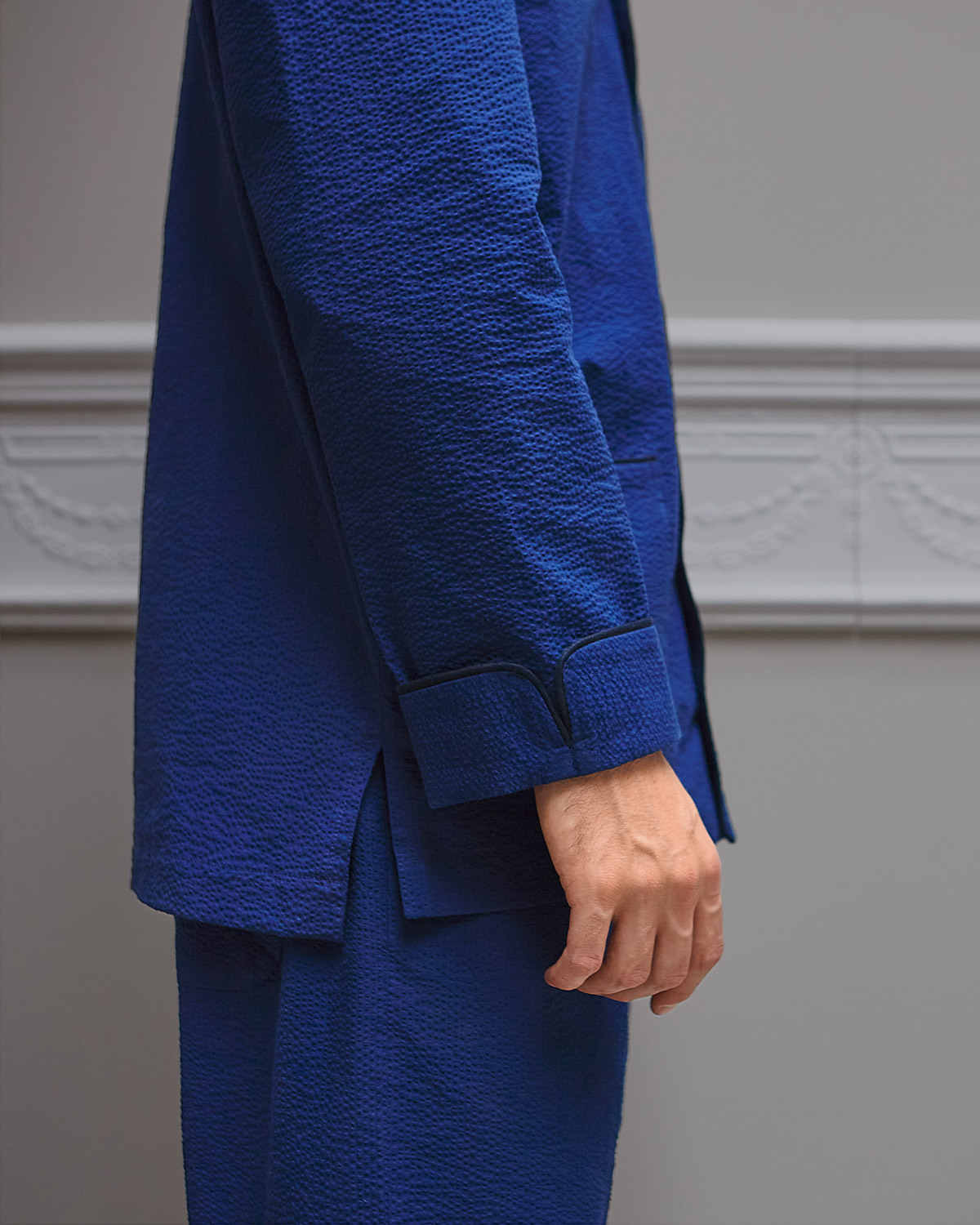 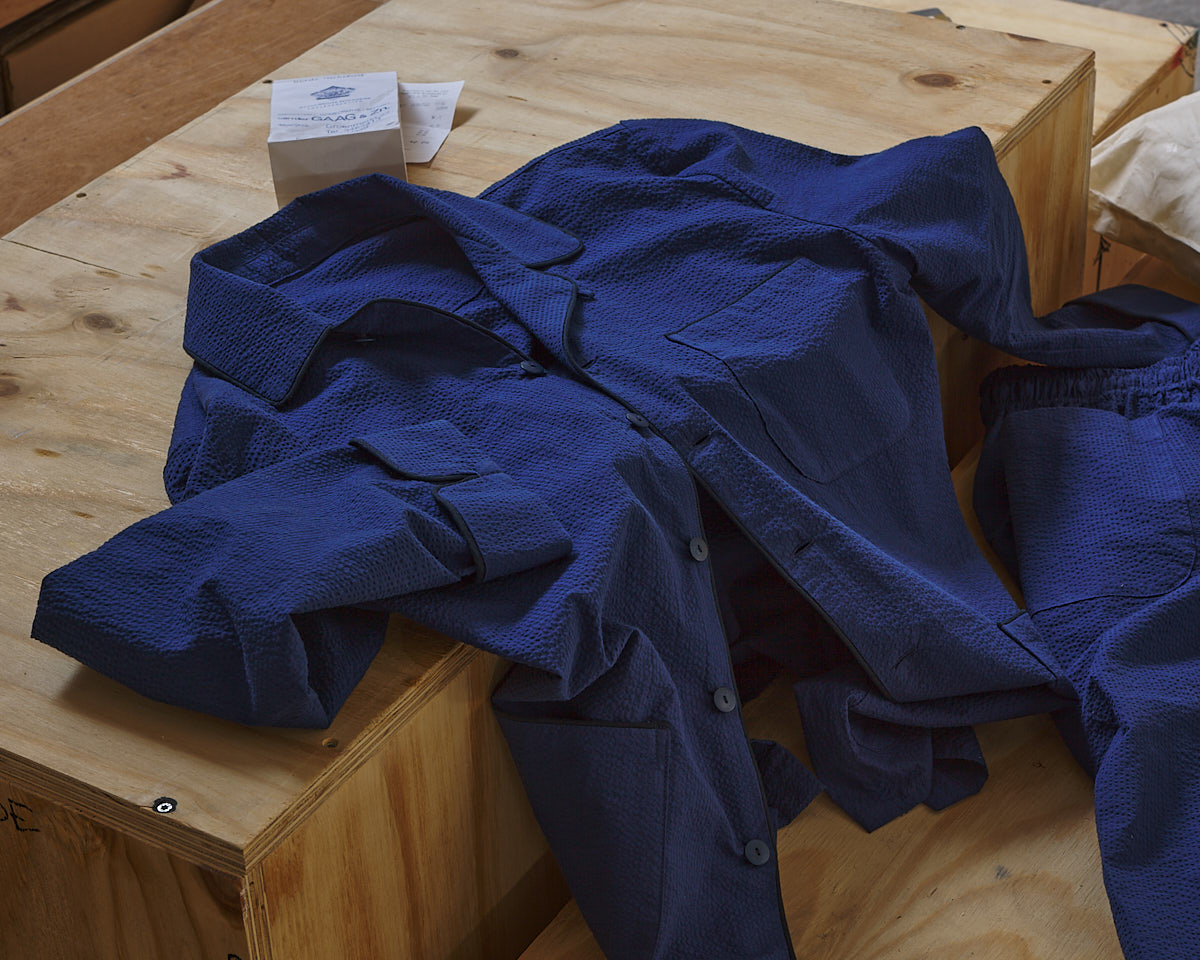